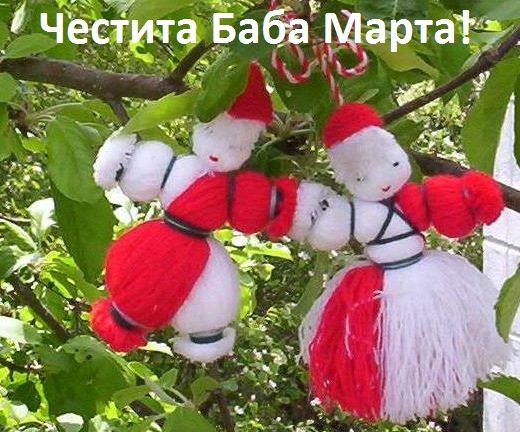 This custom, considered the Bulgarian, is characteristic of the Balkan Peninsula and has become a Balkan tradition. Martenitsa is a small piece of adornment, made of white and red yarn and worn from March 1 until around the end of March (or the first time an individual sees a stork, swallow, or budding tree). The name of the holiday is Baba Marta. “Baba” is the Bulgarian word for “grandmother” and Mart is the Bulgarian word for the month of March. Baba Marta is a Bulgarian tradition related to welcoming the upcoming spring. The month of March, according to Bulgarian folklore, marks the beginning of springtime. Therefore, the first day of March is a traditional holiday associated with sending off winter and welcoming spring.

On the first day of March and for a few days afterwards, Bulgarians exchange and wear white and red tassels or the Pizho and Penda dolls. In Bulgarian folklore the name Baba Marta is related to a grumpy old lady whose mood swings very rapidly.

This is an old pagan tradition that remains almost unchanged today. The common belief is that by wearing the red and white colours of the martenitsa people ask Baba Marta for mercy. They hope that it will make winter pass faster and bring spring. Many people wear more than one martenitsa. They receive them as presents from relatives, close friends and colleagues. Martenitsa is usually worn pinned on the clothes, near the collar, or tied around the wrist. The tradition calls for wearing the martenitsa until the person sees a stork or a blooming tree. The stork is considered a harbinger of spring and as evidence that Baba Marta is in a good mood and is about to retire.

Wearing one or more martenitsi is a very popular Bulgarian tradition. The martenitsa symbolises new life, conception, fertility, and spring. The time during which it is worn is meant to be a joyful holiday commemorating health and long life. The colours of the martenitsa are interpreted as symbols of purity and life, as well as the need for harmony in Nature and in people’s lives.

Some of the specific features of parvomartenskata rituals and especially tying the twisted white and red woolen threads, are the fruit of centuries-old tradition that has been inherent in the Thracian (Paleo-Balkan) times.

In 2015, Vidin apply for inclusion in the book “Guinness World Record” with the longest martenitsa – 16,704 m, which was awarded with a certificate. 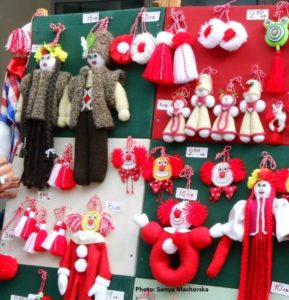 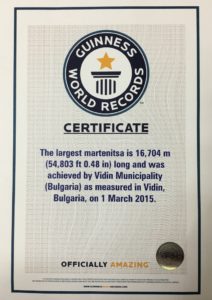