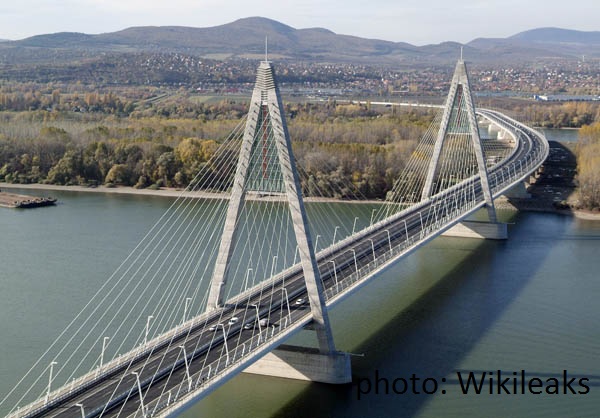 Arcing over the River Danube at the most Northern point of the capital, the Megyeri Bridge is the longest bridge of Budapest, and that of the whole River Danube. It is Hungary’s first cable-stayed river bridge, part of the M0 highway around Budapest. Opening date: 30 September 2008

Structurally the Megyeri Bridge is made up of five parts with a full length of 1862 meters and a width of 35 meters. From the full length three flood area bridge sections were built on 929 meters, while on further 922 meters two sections span over two arms of the River Danube. It bridges over the main branch of the Danube, the Southern part of the Szentendrei Island, the Szentendre Danube branch and the flood areas. At the Northern sector of the M0 the highway has 2×2 traffic lanes on the bridge, with a wider emergency lane as prescribed, allowing a long-range extension. In future, if the growth of the traffic demands, the road can be extended to 2×3 lanes without alteration of the bridge structure by eliminating the emergency lanes. On the North side of the bridge a cycle path also for the use of disabled can be found, whereas on the South side there is a sidewalk. The bridge is furnished with public lighting as well as navigation and aviation lights.

Situated at the northern end of Margaret Island, Arpad Bridge is the second longest and at present the most congested bridge in Budapest. It is named after chieftain Arpad, the leader of the first Magyar settlers of Hungary.
The bridge is 928 meters long and 35.4 meters wide. It contains six traffic lanes, as well as two tram lines in the middle and also a pavement and a bicycle lane each at both sides. Opening date: 7 November 1950.

Margaret Bridge is the second permanent bridge of Budapest, a distinguished example of French Neo-Baroque bridge-building in Hungary, Its. Margaret Bridge was built accordnig to French plans. The statues on the pillars carved by Thabard. The bridge structure rests on seven pillars altogether: one central pillar, two riverside pillars and four riverbed pillars. Their ornated statues were carved by French sculptor Thabard in 1874. A plaque is embedded at the southern side of the central pillar, commemorating the date of the construction, as well as the name of the designer.

The Chain Bridge was the first permanent stone-bridge connecting Pest and Buda, and only the second permanent crossing on the whole length of the river Danube. It is one of the symbolic buildings of Budapest, the most widely known bridge of the Hungarian capital. Its construction was proposed by Count István Széchenyi, one of the leading figures in 18th century Hungary. Its official name is Széchenyi Chain Bridge. Works were started in 1839 to the plans of English engineer William Tierney Clark with the financial support of Baron György Sina, a Viennese financier. The construction was supervised by Scottish engineer Adam Clark, who later on went on to marry a Hungarian girl and settled down in Hungary. The place at the Buda end of the bridge has been named after him.

The stone lions situated at both abutments have been carved by sculptor János Marschalkó. These, however, took their allotted places only in 1852. At the Buda end, their plinth also contains the coats of arms of the families Széchenyi and Sina cast by András Gál. They have luckily survived the destruction of World War II. It is a widespread urban legend in Budapest that the lions of the Chain Bridge do not have tongues. The legend lacks any factual basis, the lions do very well have tongues, however, these can only be seen from above.

Elizabeth Bridge was named after Queen Elizabeth, the spouse of Francis Joseph I assassinated in Geneva in 1898. With only one 290-meter span stretching over the Danube, the original bridge built in eclectic style was known as the longest suspension bridge of the world.

The construction of the bridge was started in 1897 to the plans of Aurél Czekelius and Antal Kherndl. At that time, it was considered a most up-to-date solution to place the pillars supporting the portal of the bridge onto the river bank instead of the river bed. Thus the middle span of the bridge amounted to 290 meters, making the old Elizabeth Bridge the public bridge with the largest span in the world for 23 years.

Unfortunately, the Elizabeth Bridge, along with many other bridges, was blown up by German troops at end. However, only the southern chain-locker exploded, the payloads in the northern chain-locker were found later, during the demolition of the bridge. Due to the explosion, the pylon contorted and was deformed to an unidentifiable mass by the chains. At the Pest side, the pylon and the riverside span were preserved and went on to be a sad spectacle in the view of Budapest. For quite a long time, no replacement could be built for the old Elizabeth Bridge.

The public resistance test was a spectacular “dress rehearsal” for the bridge. 126 vehicles, buses loaded with sandbags, trams and lorries would drive up onto the bridge. The bridge was loaded with 2 000 metric tons, the sinking measured at the central part amounted to 90 centimeters. Evertyhing went according to plan. The rebuilt bridge was inaugurated on 21 November 1964. The length of its span – 290 meters – is identical to that of the old Elizabeth Bridge. Till this day, the Elizabeth Bridge is the most elegant bridge of Budapest.

Liberty Bridge is the third and shortest bridge of Budapest. It was built for the Millennium World Exhibition in 1896, its original name being Francis Joseph Bridge. It was built to plans resulting from a design competition held in 1893. Originall, it was named Fővám Square Bridge after the Fővám Palace, which currently hosts the Budapest Corvinus University, formerly known as Budapest University of Economics. The bridge was designed by János Feketeházy, chief engineer of the Hungarian Railroads at that time. Construction was started in June 1894. It was inaugurated by Francis Joseph I, who hammered in the last silver rivet on the Pest side on 4 October 1896, at the festivities held for the thousand-year jubilee of Hungary. The bridge was named Francis Joseph after the Emperor. Two years later, in 1898 tramway traffic was started on the bridge.

Liberty Bridge is the third and shortest bridge of Budapest. It was built for the Millennium World Exhibition in 1896, its original name being Francis Joseph Bridge. It was built to plans resulting from a design competition held in 1893. Originall, it was named Fővám Square Bridge after the Fővám Palace, which currently hosts the Budapest Corvinus University, formerly known as Budapest University of Economics. The bridge was designed by János Feketeházy, chief engineer of the Hungarian Railroads at that time. Construction was started in June 1894. It was inaugurated by Francis Joseph I, who hammered in the last silver rivet on the Pest side on 4 October 1896, at the festivities held for the thousand-year jubilee of Hungary. The bridge was named Francis Joseph after the Emperor. Two years later, in 1898 tramway traffic was started on the bridge. During World War II, on 16 January 1945, Francis Joseph Bridge, as every other bridge in Budapest, was blown up by retreating German troops. After the end of the war, it would be the first bridge to be reconstructed. Its state was not irreparable, only its central parts had to be rebuilt. It was reopened for traffic on 20 August 1946, its new name being Liberty Bridge. It meant also the first time after the liberation of Hungary that a tram connecting Buda and Pest crossed the bridge.

Petofi Bridge is situated southwards from Liberty Bridge over the Danube. It is named after the renowned Hungarian poet and revolutionist Sándor Petőfi. Prior to that, it had been called Miklós Horthy Bridge.

The old bridge existed only for a few years because, as the other bridges in Budapest, it was blown up by retreating German troops at the end of World War II on 14 January 1945. Following this, the Soviet Army established a provisional bridge on its ruins. Eventually, the bridge was rebuilt between 1950 and 1952. The repeated inauguration of the bridge took place on 22 Novembr 1952. This time, it was already christened Petőfi Bridge, the Grand Boulevard tram passed through it, and the old glow-lamps were replaced by fluorescent illuminators above the roadway.

Between 1979 and 1980, the bridge-deck was renovated. The road had to be closed partially so that the heavily corroded framework of the bridge could be replaced and that the carriageway stab could be rebuilt. Cycle paths were closed down, increasing the width .

Rákóczi Bridge (Hungarian: Rákóczi híd, formerly known as Lágymányosi híd / Lágymányosi Bridge) is the most southern Danube bridge of Budapest. It connects Könyves Kálmán Boulevard to the south Buda district of Lágymányos, after which it has been named . The Rákóczi Bridge was built in 1995 for a planned World exhibition that should have been held jointly by Budapest and Vienna. Although the World exhibition did not take place in the end, the bridge still had been built. Its construction had become necessary for two reasons: on the one hand to discharge the Petofi Bridge, which had been the most southern bridge of Budapest until then, on the other hand to connect the recently built Könyves Kálmán Boulevard and the developing areas of the Buda side.

The bridge is 493.4 meters long and 30.5 meters wide. Its most interesting feature is the unique lighting system. The bridge contains five columns, on top of which two mirrors each are to be found. These are illuminated by high-performance halogen reflectors placed below, and from a height of 35 meters, they disperse the light evenly on the roadway. The pavement and cycle path on the northern side of the bridge and also the barriers are illuminated with the help of neon tube machines.