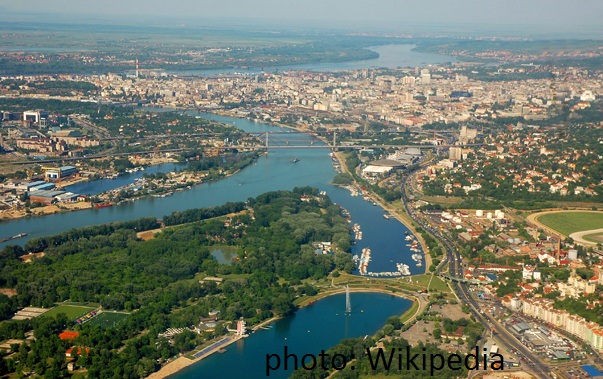 The bridge was designed by Branko Žeželj, who also designed Belgrade Fair – Hall 1 and Prokop (Belgrade). The bridge has 43 pilots.

The Bridge is a concrete highroad bridge on the Danube river near Beška, Serbia. The bridge was built in 1975 and it is the largest bridge on Danube overall – 2205 m. It was bombed twice and partly destroyed during NATO bombardment on 1 April and 21 April 1999, but it was temporarily fixed soon after the bombing was over and reopened on 19 July 1999, as it is an important part of the E75.

An identical new bridge has been built right next to the existing one between 2008 and 2011, and was opened on October 3, 2011. It was built to allow for a full motorway profile of the E75, having two traffic lanes, hard shoulder lane and two pedestrian lanes.

Pančevo Bridge or colloquially Pančevac (Serbian: Панчевачки мост, Pančevački most) is the only bridge over the Danube in Belgrade, the capital of Serbia. It was named after the northern Serbian city of Pančevo (in Vojvodina) which is connected to Belgrade by the road continuing from the bridge.

Construction of the original bridge began in 1933. On October 27, 1935 it was inaugurated by the Prince regent of Yugoslavia, Pavle Karađorđević and named after the still minor King of Yugoslavia, Petar II (Most Kralja Petra II). After German attack on Yugoslavia on April 6, 1941 in the course of the World War II, Yugoslav army command decided to blow up all three existing bridges in Belgrade (two over the Sava and one over the Danube) in a vain attempt to slow down the German army advancement. The Bridge of King Petar II was destroyed in the night between April 10 and 11 1941.

Germans repaired the bridge for their purposes during the period of occupation 1941-1944. In spring of 1944 Allied Anglo-American bombing of Belgrade began. The bridge was hit and damaged in the bombings of April 16 and September 3, 1944. When Germans began to withdraw from Belgrade in October 1944, Germans destroyed the bridge themselves.

Reconstruction of the bridge began in 1945, upstream from the remnants of the destroyed supporting pillars. Plans were done by the 50 Russian engineers, headed by Vladimir Aleksandrovich Golovko (1897–1956), lieutenant general of the Red Army’s technical troops. Joseph Stalin’s orders were that they should build a provisory crossing rather than an expensive railway bridge, but Josip Broz Tito convinced him that proper bridge should be made. On November 7, 1946 first train passed over the new bridge and regular road traffic started three weeks later, on November 29. Originally, Tito named it the Bridge of the Red Army (Most Crvene Armije).

After 20 years, in 1965, the bridge had a last major renovation. Not counting the Đerdap dams on the Romanian border, Pančevo Bridge was the only bridge over the Danube in Serbia that was not destroyed by the NATO aviation during the bombing of Serbia from March 24 to June 12, 1999.

The original bridge was built by the German companies, Siemens-Baunnion GmbH from Berlin, and Luxemburgische Bergwerks und Hütten A.G. from Dortmund. First company supplied the pillars for the bridge. Work of these two companies was a part of the reparations Germany had to pay to Serbia for the damages committed during the World War I.

In 1946, the bridge was originally intended to be just a railway bridge but later it was opened for the road traffic, too. Today, it has two lanes in both directions for road traffic, and even though it was designed to have two rail tracks as well, at the moment there is only one rail track on the bridge.Total length of the steel bridge is 1,526.4 meters, of which 1,134,7 meters is over the river bed. The height of the main supporting pillars is 18 meters.

The Ada bridge or alternatively Sava bridge is a cable-stayed bridge over the Sava river in Belgrade, Serbia. The bridge crosses the tip of Ada Ciganlija island, connecting the municipalities of Čukarica and New Belgrade. The bridge pylon is located on the tip of the island, which has been reinforced with large amounts of concrete and has been slightly enlarged to provide stronger foundations.

The Gazela Bridge (Serbian: Mост Газела / Most Gazela) is the most important bridge in Belgrade, Serbia, across the Sava river. It is a part of the city highway and it lies on European route E75, on the highway passing through the wider city center, connecting Belgrade with Niš to the south, and Novi Sad to the north. The bridge was designed by a group of engineers led by Milan Đurić, and built by the Mostogradnja company.

The bridge is 332 m long and 27.5 m wide, with three lanes in each direction, and total road width of 21.8 m. It is constructed as a combination of beam and arch, with shallow-frame beam and diagonal steel-concrete abutments. The maximum height of the span centre is 22.8 m at median water level.

The bridge is the main connection between downtown Belgrade and New Belgrade, and also carries the transit traffic on E70 and E75 highways through Serbia. As such, it is extremely overloaded and a cause of frequent congestion, as it leans on the main Belgrade’s Mostar interchange. On average over 160,000 vehicles cross it every day (notwithstanding the impeded flow), even though it was designed to be used by 40,000. However, the bridge was almost completely redone in 2011 and it now supports up to 200,000 vehicles per day. Additional relief is expected when the Belgrade bypass is completed, which is currently under construction and is scheduled to be opened in 2013. There was also a significant relief when the new Ada Bridge was opened for traffic, on January 1, 2012.

The bridge’s overhaul started in the first half of 2010 and was finished in the second half of 2011. This is the first major reconstruction of the bridge since its completion in 1970. As the bridge is part of the E75 International Road (motorway), there were traffic rushes throughout the day. It would sometimes an hour just to cross the bridge. Vehicles over 3.5 tons were prohibited from entering the city if in transit, and were instead diverted to the Belgrade bypass. However, as the Belgrade Bypass is only half completed, this posed a challenge for some truck drivers. To make matters worse, the bridge has been closed in its entirety for 7 days, causing unprecedented traffic chaos in Belgrade. To speed up the reconstruction, hundreds of workers were on the bridge 24 hours a day, 7 days a week. As a result, the bridge’s overhaul was completed in record time.

Since its reconstruction, city officials stated the bridge would be able to handle 200,000 vehicles daily for the next 40 years.

The bridge is located on the Corridor X and represents one of the most important object efficient trafficflows in Novi Sad and throughout Serbia. New Žeželj Bridge will be built on the original route and on the existing central foundation. It will be 474 meters long with two connected steel arch of 180 and 220 meters. According to the preliminary design, the width of the bridge will be 31.6 meters and it will have two rail tracks, two road lanes and two pedestrian-bicycle paths.

Construction of the bridge, total value of 60 million EUR, will be financed partly from European Unionfunds (30 million EUR), partly from the budget of Vojvodina (20 million EUR) and the budget of theCity of Novi Sad (10 million EUR). On August 10th 2010 a tender for the construction work for road-rail bridge over the Danube in Novi Sad was published, in the area of collapsed Žeželj bridge, with purpose of planning and construction of the new Žeželj bridge and removal of the existing temporary bridge. The deadline for completion is 32 months. Zhezhelev Bridge is open to traffic in 2018.

Varadin Bridge (Serbian: Varadinski most or Варадински мост) is a bridge on the Danube river in Novi Sad, Serbia. The bridge was built in 2000, after the previous bridge at this location was destroyed during NATO bombardment on April 1, 1999. Varadinski as the name used for several Danube bridges, temporarily constructed between Novi Sad and Petrovaradin.

It was built 1921-1928 to place before the First World War was planned to build a permanent bridge. First was destroyed in 1941 when the Yugoslav Army it is mined to prevent the invasion of the Germans. It was later rebuilt by the Germans who destroyed it in 1944, when they are withdrawn.

This bridge is the first bridge, rebuilt after World War II. Renovated in 1945, and the construction of Zhezheљev bridge, on it there and rails. He has a lattice structure. In 1999 should be increased height, but on April 1, 1999, NATO aircraft destroyed it.

Immediately after NATO’s aggression began construction of a new bridge. At the end of 1999 removed the remains of the old bridge and the beginning of 2000 workers from Nis MIN work around the clock in Novi Sad to build the bridge. Opened in September 2000. When opening is named “Varadinska arc”, but later the name was changed to Varadinski bridge.