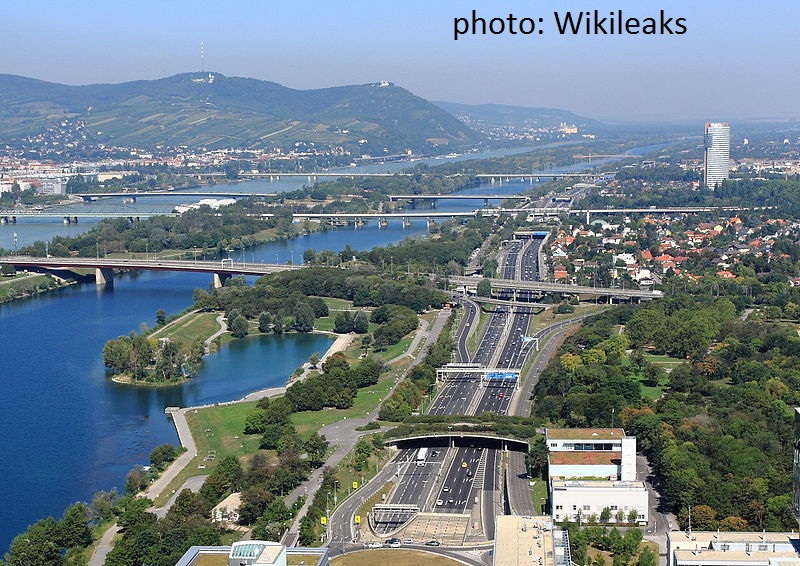 The Nibelungen bridge spans the Danube river from the Hauptplatz (main square) was at that time Linz’s version of Checkpoint Charlie. The Nibelungenbrücke with the two bridge head buildings is the only architectural plan Hitler ever carried out in Linz.

Following the Nibelungenbrücke Bridge, you’ll see the famous Hauptplatz in the centre of which the Dreifaltigkeitssäule, the Trinity Column, was erected in 1723 by the States of Upper Austria to thank God for having preserved Linz from three consecutive perils: the 1704 Turkish invasion, the 1712 fire and the 1713 plague. On the other side of the bridge you can see the Ars Electronica Cente

The Linz railway bridge is one of three bridges across the Danube in Linz at river kilometer 2133.90. It is part of the communication path between the Mühlkreisbahn and the Western Railway. Despite its name, it is mainly used by car traffic and is blocked only during a short Zugquerung to traffic.

The Kremtz Bridge is a road bridge. It is made of steel.

The Floridsdorf Bridge is a road bridge over the Danube in Vienna. It connects the two Viennese districts Brigittenau and Floridsdorf. It has dual carriageways in both directions. Downstream it has a five-meter wide pedestrian and cycle track and tram tracks. The current bridge has a total width of 31.4 meters and the area of the flood bridge is 37.4 meters. The Bridge is a road bridge. It is made of steel.

The Brigittenauer Bridge is a six-lane road bridge over the Danube in Vienna. She has foot and cycle paths and is characterized by the red color. It connects the two Viennese districts Brigittenau and Floridsdorf. The bridge opened 1982. The Bridge is a road bridge. It is made of steel.

The “Ostbahnbrücke” is a railway bridge in Vienna. It connects the districts Simmering and Leopoldstadt through the Danube Canal. It was built in 1870, 1945 destroyed during war and finally rebuilt in 1946. The Bridge is a railway bridge. It is made of steel.

The “Augartenbrücke” runs over the danube canal and connects the 2nd with the 9th distirict. It was the first bridge which was restored after wolrd war.