A duck family appeared in the closed Lukács Gyógyfürdő Mineral Bath in Budapest, Hungary. Duck with its 14 ducks safely swim in the outdoor mineral pool, unsettled by anyone. The spa has been closed since March 15 because of the coronavirus epidemic.

The mineral waters of Budapest have been inextricably linked to the city’s history for centuries. Carrying the proud title of City of Spas, the capital of Hungary boasts 118 thermal springs providing over 70 million liters of mineral water per day and temperatures ranging from 21℃ to 78℃. When Budapest was within the Roman Empire, there were 14 bathrooms in the city. Later, when the Turks conquered the Hungarian capital, the Turks built more. They all work today, visited by thousands of people from Hungary and abroad.

Today, Budapest has 15 publicly accessible mineral baths, not including private ones as well as those in hotels. The healing properties of the mineral water in the Lukacz Bath area were known as early as the 12th century when the Knights of the Order of Saint John came to heal their wounds. Today, the traditions of mineral water treatment continue from the Institute of Rheumatology and Physiotherapy, which is adjacent to the bathroom.

A duck family is housed in the Lukács Gyógyfürdő mineral spa in Budapest, Hungary. The capital of Hungary boasts 118 thermal springs that provide over 70 million liters of mineral water per day and temperatures from 21 78 to 78 ℃. The Lukacs bath has existed since the 12th century. 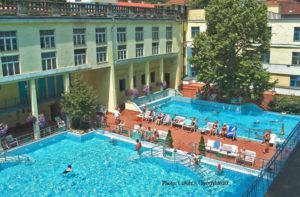